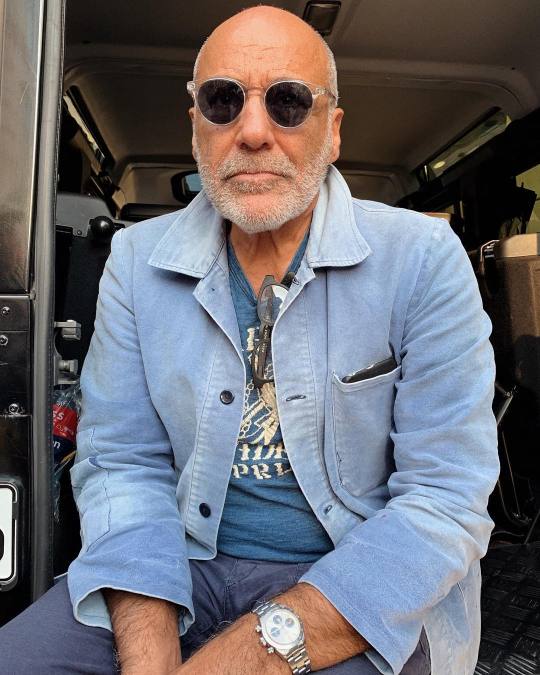 When Volodymyr Zelensky emerged from the voting booth in Kiev last month, he was wearing a dark worsted navy suit and a crisp white t-shirt. It was the biggest night of his life. Over the previous six months, the actor and comedian had been campaigning for the presidential seat in Ukraine. An early frontrunner in opinion polls, Zelensky was expected to win the election handily with over 70% of the votes — and he did. Not long after the polls closed, and with little more than 10% of the votes counted, early results showed Zelensky was coming in for a landslide victory. Incumbent President Petro Poroshenko wrote on Twitter: “We succeeded to ensure free, fair, democratic and competitive elections. I will accept the will of Ukrainian people.”

It was a big night for t-shirts (and a bigger night for Zelensky). About a hundred years after its invention, the t-shirt has gone from being underwear — replacing the union suit, which is the all-in-one undergarment you’ve likely seen in black-and-white cartoons — to an everyday piece of clothing that even presidential candidates can wear on election night. Like chinos, pea coats, and cardigan sweaters, the t-shirt has its roots in the military. Around the turn of the 20th century, the US Navy replaced square-necked, shoulder-buttoning shirts with cropped sleeved undershirts. American seamen wore them while swabbing decks and manning armaments. The shirts were made white (still the garment’s most popular color) for several reasons: white t-shirts are cheap to produce, as they don’t have to be dyed, and they marry well navy uniforms. Besides, since white t-shirts show dirt easily, it was believed they’d instill a sense of discipline and help maintain personal hygiene.

Stuffed shirt traditionalists love to mark the t-shirt as the end of Western civilization — the replacement for collared shirts and, ultimately, the suit. It’s true that t-shirts were initially undergarments that were never meant to be seen, but within my lifetime, they’ve always held the same cool appeal as blue jeans. In the run-up to the United States’ entry into the Second World War, a Sears, Roebuck, and Co. advertisement proclaimed: “You needn’t be in the army to have your own personal t-shirt,” suggesting the quotidian garment had an inherent sense of heroism and machismo. A sweat-soaked, sexually magnetic Marlon Brando wore a white tee when he shouted “Stella!” in the 1951 film adaptation of A Streetcar Named Desire. Virile heartthrob James Dean also sported one in Rebel Without a Cause. People who complain that t-shirts aren’t “proper” miss the point. The t-shirt’s military roots, machismo nature, and ability to rouse elites are exactly the reasons why it feels rebellious (although, a strong case can be made that it’s now just part of a middle-class uniform, losing all of its tough political edge).

It took something else, however, to transform an unassuming piece of underwear into fashion’s most expressive garment: printing. Graphic tees have been around for nearly as long as the t-shirt itself. In 1939, t-shirts emblazoned with “Oz” were sent out to promote The Wizard of Oz. Republican candidate Thomas E. Dewey made the first-ever slogan t-shirt with his 1948 “Dew It with Dewey” presidential campaign. In the 1960s, Tropix Togs obtained a license to silkscreen shirts for Disneyland. They gave us the most iconic of graphic t-shirts: the marled gray one with an upbeat Mickey Mouse.

By the 1970s, the graphic tee became not just part of the fashion world, but also popular culture. Culturally, it was everything: a useful garment you can wear, an inexpensive thing to produce, a cheap item to purchase, a marketing tool, a souvenir, and a symbol of identity. A t-shirt is a way to show “you were there.” From Milton Glaser’s “I Love NY” to Alberto Korda’s photograph of Che Guevara to John Pasche’s tongue and lips for the Rolling Stones, the t-shirt has become the blank canvas through which you can express your tribal affiliations. Playing off Marshall McLuhan’s famous phrase, The New York Times once said: “the t-shirt has become the medium for the message.” Even in 1973, when they wrote their article, t-shirt tastes weren’t too different from those today. Their last example is downright Vetements.

The t‐shirt is a medium for a message and fads in messages come and go. First, there were the college or high school shirts (a current Parisian fad is, wearing American college shirts) and the team shirts bought by fans for their children at sports events. Later came the “intellectual” shirts starring Bach, Beethoven or Brahms. The 1960s brought a wave of peace movement shirts: protest slogans, upside‐down flags.

Concurrently, there were commercial shirts, promoting beer or bagels or hot dogs, rock groups and movies and disc jockeys. It was camp to wear a movie star shirt printed with the picture of Marilyn Monroe or Humphrey Bogart. “I bought a pink T‐shirt with Marilyn’s picture on it,” says a young career woman. “But after reading Norman Mailer’s book, I decided she was a horrible person. But I still wear the shirt because I paid $10 for it.”

The newest shirts, of course, are inspired by Watergate. The “Sam the Man” shirt bearing the picture of Senator Sam Ervin Jr. is a hot item, along with slogans such as “I’m Democrat, Don’t Bug Me.” A young man walking through Times Square solved the rivalry problem nicely – his merely read “Shirt.”

Graphic tees have a bad rap, perhaps not undeserved. For reasons I can’t explain, a collared shirt will always look better if you’re not in outerwear. “This flap of fabric, so often superfluous to function, frames the face and caps the body, proving essential to tone,” Troy Patterson once declared. Plus, a collar allows you to cling to your dignity in much the same way a soft jersey tee tends to cling to your softer belly.

Still, I like graphic t-shirts. They’re supremely comfortable on hot days and are easy to maintain. Like checks and stripes, they add pattern to an outfit. And they go well with certain casual ensembles, such as those with chore coats, trucker jackets, and cafe racers. I like how Kapital photographer Eric Kvatek layers vintage Harley Davidson t-shirts underneath his Kapital and Levi’s denim jackets. It’s almost a personal uniform for him.

Like Pete at Put This On, I think it’s a good idea to stay close to some ground rules. Sincerity is good; irony is bad. T-shirts generally look better when they’re not overly fitted. Expensive, status-signaling tees, such as Riccardo Tisci’s Givenchy rottweiler, bring these from camp to pure corn. And while it’s good to have enough self-awareness to know when a t-shirt is too cool for you, you don’t have to obsess over it. “Everyone’s a poseur at some point,” writes Pete. “No one’s born knowing which Ramones albums are good or what a stalefish looks like. So don’t be afraid to buy a t-shirt that’s a little cooler than you – it may even expand your mind.” Here are ten graphic t-shirts I like right now:

Niche: When I was a kid, my dad used to bring me with him to Home Depot for his gardening supply runs. These Niche seed packet t-shirts remind me of those trips. The vibrant graphics look great under Chimala’s chore coat and Margiela’s five-zip. The cotton is stout and a little rougher than the Blurhms t-shirt I bought this season, but fitting for a tee inspired by dirt digging.

Midnight Rider: These faux-vintage t-shirts have pre-distressed edges and washed out colors, making them look like the kind of t-shirts you pull from the back of a thrift store. These are nicely affordable, look great with workwear, and feature some of my favorite bands (if you haven’t heard the legendary guitar picker Waylon Jennings, get on that).

Mollusk: This San Francisco surf label perfectly captures the laid-back attitude in Californa sportswear. I like the leafy green illustration on this greenhouse tee, as well as the squiggly lines on this olive wave design.

Phoenicia Diner: This Catskills diner has great, all-American food and a 1960s charm. Granted, it would be cooler if you bought this while actually visiting the diner, but it’s also online. Relatedly, merch that you can only get at a cool store — particularly things dealing with art, music, or books — is also good. T-shirts for Green Apple Books in San Francisco, for example, are weirdly popular in Japan but unavailable in the US except at Green Apple Books. Find something meaningful to you.

OnlyNY: If anyone presses you on your Audubon credentials and asks you to name your top five favorite passerine birds, you can look down and get a head start. Pairs well with binoculars and available in marled gray.

Cafe Nyleta: Although not an actual cafe, Cafe Nyleta’s t-shirts let you show your love for coffee while enjoying a bit of insider humor (“Have a Nice Drip”). Yes, it skirts the line of irony, but it’s also Self Edge approved, so by definition cool.

Book Works: An ode to jazz festival season, both past and present, this Book Works tee features a simple, but handsome, typeface. Every purchase comes with one of these jazz fest stickers (I really want one).

Sunspel: Japanese artist Akira Sorimachi’s colorful illustrations grace this Pima cotton t-shirt. The illustrations are inspired by British summers, and nicely reflect an appreciation of the great outdoors without feeling overly rugged. Good for guys who have a dressier sensibility.

Vintage: The source of inspiration for some of today’s best designs, original vintage tees are always great – and come with a soft, already broken-in feel. If you’re unsure what to get, find a vintage tee with your alma mater. Etsy is full of this stuff.