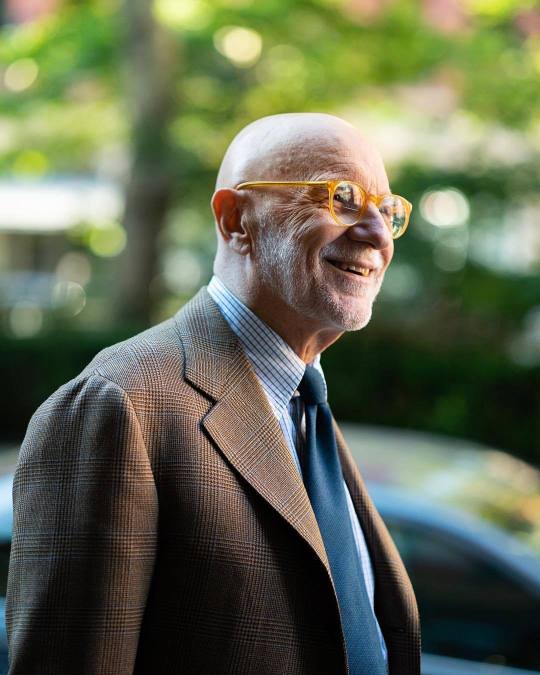 Spring is the season for songbirds and meaningless baseball, cool mornings and warm afternoons, but for people who love clothes, it’s also the worst time of the year. Spring clothes are often less interesting. There fewer opportunities to layer. The cuts reveal more than conceal, and few of us look good naked. Whereas dressing for winter can be a paint-by-numbers exercise, dressing for spring is more like trying to solve a puzzle. How do you dress well, but also comfortably?

It always takes me a while to switch wardrobes this time of year, but I often go back to the same things – breathable tailoring, button-down shirts, and loafers. For casualwear, it’s usually a workwear styled jacket and some raw denim jeans (gotta get those fades). I also like bolder shirts nowadays with unusual collars, and have even been embracing things such as graphic tees. If you’re looking for some early spring inspiration, here are some things I’ve been thinking about.

MY KIND OF FUN SHIRT

Simon Crompton at Permanent Style had a post ten years ago suggesting that British men like to experiment through their shirts while Italians prefer to do so through their jackets. There’s a kernel of truth in there. If you visit the various shirtmakers on London’s Jermyn Street, many of them will carry everything from multi-colored stripes to Tattersalls to floral prints. Italian men, on the other hand, are more likely to wear conservative, light blue shirts underneath daring sport coats in bright and bold plaids. Simon calls those shirts the “Italian background.”

“The combination works well because a blue shirt fades into the background; a dark tie fades more into the background than a pale tie; and because the dark blue tie is more harmonious with a blue shirt without being too similar and evoking tone-on-tone,” he wrote. “But this is analyzing the obvious. It works as the plainest and yet most sophisticated of supports to an otherwise daring suit pattern – or indeed odd jacket. It equally supports an adventurous pocket square, gloves, hat, or jacket. When trying to balance an outfit, the Italian would much rather tone down a tie than go without one.”

I almost only ever wear light blue shirts because they go with everything. Sticking to just one type of shirt removes one more thing you have to coordinate in the morning. But I’ve also been thinking about picking up some bolder stripes this season in cheery colors — white stripes combined with burgundy, sea green, or even canary yellow. “Something in a mid-blue or grapefruit pink can be a way to incorporate more color into a wardrobe without making you feel like you’re stepping out of your comfort zone,” says Drake’s Creative Director, Michael Hill. These will never be your go-to shirts, but they can be a way to add some personality to an outfit while also knocking down the formality.

I CHECKED AND YOU’RE THE WORSTED

Most wool fabrics can be categorized in one of two ways: worsted versus woolens. Maybe these categories should be renamed to combed and uncombed, however, because it’s the combing process that distinguishes them.

Combing wool is exactly what it sounds like. Before spinning the yarn, a maker will comb out the wool to set the hairs parallel to each other, as well as remove any of the shorter fibers that would spoil the regularity characteristic of worsted. After the wool has been combed, it’s spun into yarn, and then woven into a fabric. By combing the hairs first, the resulting cloth will feel a bit smoother and crisper. Woolens, on the other hand, aren’t put through this preparation process. Thus, the fabric is spongier and loftier, as the fibers point in every possible direction. To give examples, wool gabardine is a worsted, while tweed is typically a woolen.

Worsteds are more common in the spring and summer months because they wear cooler. Among my favorites are those colloquially referred to as “faux tweeds.” These have a district check pattern that you’d expect on a traditional tweed, but none of the prickly surface. Faux tweeds are like a citified version of a country cloth, or a springtime alternative to a winter jacketing. Indeed, some people don’t like them because they’re neither fish nor fowl, but they’re also perfect for those days that feel the same. Wear them on warm days when you’re not yet ready to give up on an autumn look.

Unfortunately, as the market for ready-to-wear tailoring has shrunk, so have the number of options for more interesting patterns and fabrics. Your best bet for a faux tweed is to go custom. Sort through Porter & Harding’s Glorious Twelfth and Huddersfield Fine Worsted’s Alsport fabric books. A few ready-to-wear lines this season also have wool-blends mixed with silk and linen. I don’t know if they’re “proper” faux tweeds, but this category is pretty nebulous anyway. The real point is to get a checked fabric that pairs easily with solid-colored trousers.

In a New York Times article about how army jackets became part of civilian garb, Troy Patterson traces the popularity of the garment back to the youth revolts of the 1960s and ‘70s. “Country Joe at Woodstock, John Lennon at Madison Square Garden, and Jane Fonda on the Free the Army road show all treated costume as commentary,” he wrote. “The counterculture kid in Army gear could razz the warmongering machine that had endowed the jacket with symbolic power, and he could honor boys destined to die in their boots, and he could also effectively affect a bohemian pose.” Combine this history with films such as Taxi Driver, Annie Hall, and Serpico – where army jackets were central to how the protagonists were portrayed – and you have the makings of a classic piece of casualwear.

Military field jackets are also perfect for summer. The Office of the Quartermaster General — the US Army department in charge of designing and supplying equipment — made the original M-43 and M-65 jackets out of an 8.5oz cotton sateen known as OG-107. These jackets are long enough to be functional, but short enough for movement. They’re made from a nearly indestructible, pure cotton or cotton-nylon blend that blocks wind but is still reasonably breathable. Both the M-43 and M-65 were used in the hot tropics during the Vietnam War. Their roomy front pockets, button-up fly front, and unique collar styles also just look really good. I like how Nathaniel of Broadway & Sons, a vintage workwear supplier, wears his above – slightly oversized with patched up jeans and a vintage t-shirt.

The best thing about military field jackets is that they’re available at nearly every price point. They’re made from cheap fabrics, and their designs lend themselves well to mass production (the originals, after all, were literally made for war). You can pick up vintage and milsurp jackets for under $100 at local thrift stores or online. Designer versions can run into the thousands of dollars, but one of the best field jackets I’ve seen was from Ralph Lauren, which retailed for $400. Ralph Lauren has the design team and supply chain necessary to get the details right — enzyme washed fabrics, unique pockets and zippers, and drawcord waists — but you have to wait for them to come out with the right one (this season’s version has really corny patches and writing — why oh why!?!). J. Crew’s Mechanic jacket, which retails for just under $200, is even pretty good.

Spring is for idling, and once you accept the uniform of a True Idler, you have to pick your shoes, which will naturally be … well, loafers. Not all loafers are good for loafing, however. Like grey flannel trousers, some are dressy and make you feel guilty about hanging around outside the office. Others, on the other hand, will allow you to believe that you can spend the day at the cafe, working on an assignment, while occasionally — and only occasionally — checking the internet.

This spring, I’m looking forward to wearing shell cordovan loafers again. Shell is often thought to be a dressy material, perhaps because it’s expensive, but it was originally used for casual styles such as work boots. It’s surprisingly good for spring/ summer slip-ons. The leather has a kind of luster that can’t be replicated with calfskin (well-polished loafers look wrong to me, as they give up the game, but shell cordovan loafers have a natural gleam that still allows you to look carefree). Most of all, shell gives loafers a heavier looking silhouette, which makes them look a little more casual.

Shell cordovan loafers can be worn with jeans and chore coats, flat front chinos and linen sweaters, sport coats and tailored trousers. As a three season shoe, they can be worn from now until the end of fall. They’re the official shoe of “I’ll just watch one more YouTube video” and refreshing Twitter.

Every country has its own style of a workman’s jacket, but the French version is the most recognizable – thanks in part to the late, great Bill Cunningham, who wore his with straight-legged chinos, black sneakers, and white dress shirts. Cunningham made the workwear style part of his daily uniform as he bicycled through NYC, documenting the city’s best-dressed. As the story goes, he bought his at a French hardware store for just twenty bucks. You’d be hard pressed to find those kinds of prices these days, but they’re still reasonably affordable.

The best thing about the French chore coat is its simplicity. There’s no lining or structure inside, which makes it comfortable to wear on a warm day. And while some versions are made from moleskin, most are sewn together from cotton drill – a sturdy, dirt-resistant fabric that looks better with a bit of wear-and-tear. Add to that two big, patched hip pockets – sized large enough to carry a paperback book and a sandwich – and you have yourself a great piece of spring outerwear. Good for picnics, hanging out at cafes, and spring chores. If the coat gets dirty, just throw it in the wash.

Chore coats look better when they’re old and raggedy, slightly oversized and idiosyncratic in terms of fit. You can find affordable versions if you shop vintage, get something new from reputable French companies for a little more, or splurge for designer interpretations. Don’t get too hung up on things like price or quality. French chore coats are as democratic as they come — these look good when they’ve been authentically worn in, regardless of their price.

my asian parents have these in the fridge