My friend Reginald-Jerome de Mans recently wrote a review on Adolf Loos’ short volume of collected essays, titled Why a Man Should be Well-Dressed. Loos was an influential European architect at the turn of the 20th century, whose main work foreshadowed modernism in architecture and design. In his spare time, he opined on men’s fashion in cantankerous ways. Frankly, I found his book to be one of the worst I’ve read, although RJ feels otherwise (his review is infinitely better than the book itself). That said, I agree with the opening of RJ’s essay: “I love a book whose author dares to assert a viewpoint. In clothing, this means more than simply asserting ‘style is eternal’ or ‘nice clothes are nice,’ as most books on the subject seem to do.”

So, in that spirit, I’ll dare to assert a viewpoint: I find some coats look better worn open, and others better closed. And to the degree that anything can be generalized, the ones that look better open tend to be single-breasted. Double-breasted coats can be worn either way, but the fullness of the front lends itself to being fastened. This is true of everything from dress outerwear to more causal parkas and leather jackets.

I mentioned this offhandedly last year on StyleForum and received a ton of pushback. Frankly, I hadn’t even realized that the view could be controversial – that coats don’t always look equally good both ways. That there’s a difference in how things can look when styled, and this is worth considering when choosing what to wear for the day. I find single-breasted coats to be best for cooler autumnal days; double-breasted to be better if you need something very thick and warm for winter. If the weather is so cold that you think you’ll need to keep covered most of the time, a double-breasted overcoat is going to look better than a single-breasted one. 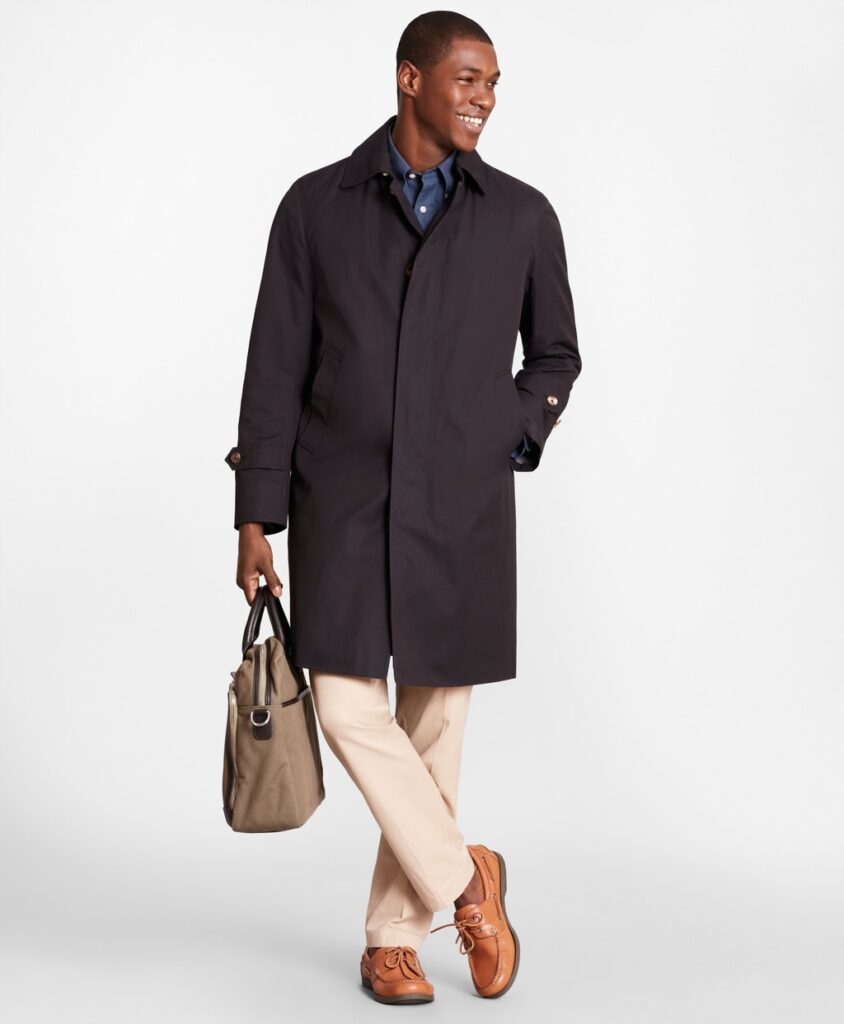 Compare this example above, for instance, against everything else below. It’s not that single-breasted coats look bad when fastened – it’s that they often look better worn open. When buttoned up, the front doesn’t give enough visual interest. A man can look like he’s wrapped in a bolt of cloth, especially if the coat closes high on the body (as opposed to one with longer lapels, which would open up that v on the chest, giving you space to at least accessorize with a scarf). A double-breasted coat, on the other hand, has that bit of asymmetry and added detailing, helping visually break up the vast expanse of fabric. The longer the coat, the more important this dynamic.

When a coat is worn open, there’s space to show off a bit of layering – the shirt, sweater, and scarf peek through. Color combinations and crisscrossing lines can be seen. Setting aside issues of formality, this is why suits and sport coats often look better when they’re accessorized with a tie or pocket square, instead of left plain against a stark white shirt. Or why tailored jackets often seem more dynamic when the quarters – a colloquial term for jacket’s opening below its buttoning point – look better when they’re slightly open, with lines sweeping back towards the hips.

I also find coats look more casual and carefree when worn open. It’s stylish in that dégagé way, suggesting you may have just thrown it on when running out the house. To be sure, there are exceptions. Closing a suit jacket or sport coat, for example, can help define the waist, lending more shape to your silhouette (I find this to be especially true of less structured jackets). And, obviously, if it’s frigid out, you should fasten whatever you’re wearing. There’s practical dimension here that’s just plain common sense.

That said, when I decide what to wear for the day, I try to keep in mind that some coats look better when styled in certain ways. It’s not a hard rule, as there are no hard rules to this stuff, but a general one. If it’s freezing out, that means a heavy, double-breasted overcoat worn closed, then single-breasted outerwear worn open almost all other times. If a single-breasted coat is fastened, there should be some pretty great detailing at the front to make it look interesting.