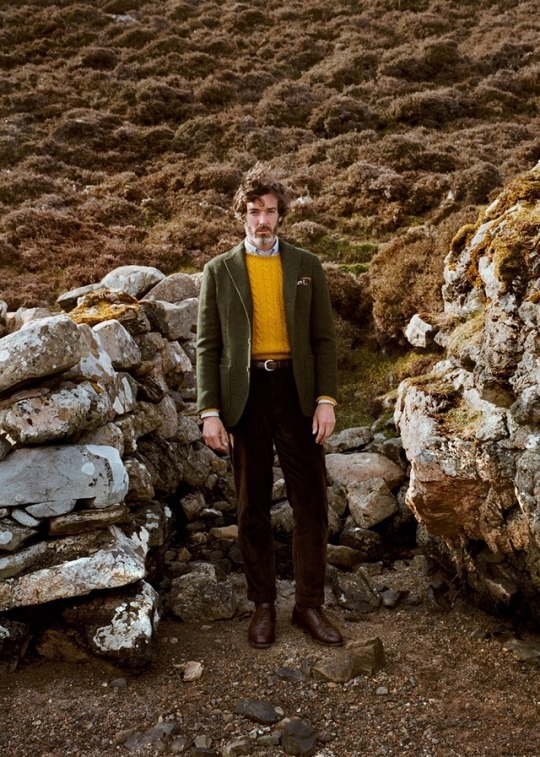 The explosion of sportswear and designer clothing after the Second World War shattered dress norms. Whereas men in the pre-war era were united by their allegiance to the coat and tie, fashion became a lot more diverse and divergent after the 1950s. Prole gear such as chambray shirts, five-pocket jeans, and white tees became popular off the worksite precisely because they represented something different – something more rebellious – to the more formal buttoned-down and strait-laced look of the establishment. Bruce Boyer has a nice essay about it in his book Rebel Style.

To the degree there’s still a male uniform in the United States, it’s the dress shirt with dark jeans and a smooth merino knit. It’s the final outfit for men who don’t wear tailored jackets – the thing they can use to go to churches, offices, and other conservative settings without fear of drawing unwanted attention. It’s the thing your mother wanted you to wear when it came time to have your yearbook portrait taken. And likely what most men will be wearing next month at holiday parties.

The uniform persists for a reason. Shallow v-necks with dress collars underneath frame the face in a way that t-shirts can’t, and the combination gives a vague sense of formality without actually being formal. The look is nearly failsafe, but it’s also devoid of personality. A finely knit sweater in plain navy or gray is about as good of a candidate as any for a menswear staple, but I find I rarely wear mine.

The best way to wear a plain sweater, I think, is to layer one underneath a sport coat. That way, you still get the magical effects that come with tailoring – a better looking figure and the V-shape coming down the chest, which lends visual interest. It’s still a conservative outfit; it just looks better. Finely knit merinos and two-ply cashmeres are great for this since they lend warmth without adding bulk. I like John Smedley’s sweaters, although Club Monaco’s quality-to-price ratio offers a tremendous value (especially if you buy them on sale).

Even better than a plain sweater, however, is something patterned or textured. There are a million options – lofty lambswool Shetlands, beautifully twisted cables, brightly colored Fair Isles, charmingly flecked Donegals, and brushed Shaggy Dogs. Frankly, I even like lower-gauge knits, where you can see the individual yarns, better than smoother and plainer sweaters. All of these tend to be bulkier – making them better worn on their own or layered under a roomy casual jacket – but I find them more versatile. And infinitely better looking.

You can pair these with a Barbour jacket, field coat, leather bomber, chore coat, or parka. They look great sitting above a pair of grey flannels, five-pocket cords, or jeans. And much like how a solid-colored grenadine can be worn with almost anything, I find textured sweaters to be easier to wear than patterned ones (although, those are great too). Textured sweaters lend visual interest to plain colored jackets, but help tone down the look of more complicated designs. Some options I like this season, in both traditional and non-traditional designs:

Inis Meain: These knits take inspiration from the Aran Islands, where the company is based. Their construction, however, is much better than what’s typically made locally for the tourist market. The yarns are typically softer; the knitting dense. This season, they have a bunch of cable knits and speckled Donegals, all of which looks tremendous. You can find them at Mr. Porter, Frans Boone, Club Monaco, No Man Walks Alone, and The Hanger Project (the last two of which are advertisers on this site).

SNS Herning: The great thing about these is their three-dimensional quality. Originally designed to protect fishermen from the harsh seas, these knits are made with a unique bobble stitch to help with insulation. The design was born more out of function than fashion, but it’s found favor among non-seafarers for its comfort and aesthetics (the style goes especially well with workwear). SNS Herning is available at Mr. Porter, End, and East Dane. Be sure to size up, as these fit very slim.

O’Connell’s: My favorite source for reasonably slim-fit Shetlands. These hardy lambswool sweaters are made on the Shetland Isles and come in a billion colors. The style is a bit trad, but you can also wear these with contemporary casualwear. I hear O’Connell’s is raising the price next year, so now is a good time to buy. For something more affordable, check Howlin’ by Morrison at End, Mr. Porter, and Indigo & Cotton. For shaggy haired, brushed Shetlands, you can rummage through J. Press and the more affordable Shetland Woolen Company. O’Connell’s also has some deadstock hand-knit Arans, but you have to call in and see what’s available in your size.

Our Legacy: This Stockholm-based cult brand is known for their artsy take on contemporary casualwear, often with a strong focus on textiles. Knitwear is one of their strong suits. They have a running series they call their base roundnecks, which are textured crewnecks in odd and unusual materials. I have an older season’s version of this black sweater, which I pair with leather jackets and tailored topcoats. This olive alpaca blend also looks nice. For something similar, check Stephen Schneider. His knits are often made with the same yarn-focused spirit.

Drake’s: Few companies have Drake’s batting average when it comes to design. They’re terrific at making the things that ride the line between contemporary and classic. This season, they have a bunch of brightly colored cable knits, which I don’t think I would have ever considered before seeing their lookbook. I also love those chunky, six-ply cashmere, shawl collar cardigans – perfect for the holidays. You can find slightly more affordable versions in lambswool at The Armoury.

Timothy Everest: Timothy Everest got his start at Tommy Nutter, which should tell you something about his point of view. His line has strong roots in classic menswear, but is innovative and forward looking. I think of him as a casualwear brand for guys who wear suits during the work week. His knitwear collection this season features some wonderful speckled Donegal yarns and playful textures. I especially like these with subtle diagonal ribs. Wooyoungmi has something similar in a plush alpaca-blend.

Eidos: These Shaker-style crewnecks look like an upgraded version of something you’d get from LL Bean. The Eidos team spun indigo-dyed cotton yarns with Loro Piana coarse-hair cashmere, a carded yarn that almost looks and behaves like brushed Shetland, but features the handle of cashmere. The sweaters are thick and soft, and will supposedly age like denim. Mr. Derk has the sweater in a mid-blue, while Barney’s and Mr. Porter have it in a deeper indigo-black. (Warning, the sweaters look terrific, but the price is dizzying).

E. Tautz: It can be hard to make a textured sweater look handsome, but is also easy to wear. That’s why most on this list don’t stray too far from tradition. E. Tautz, however, has some sweaters that almost look like boucle – a heavily textured fabric made with curled yarns. They almost feel like the Our Legacy crewnecks mentioned above, but with the volume turned way up. Just look at this Instagram photo. Think of how terrific those would look layered underneath a causal winter coat. These are the sort of things that make you abandon finely knit merinos forever.

Menswear writer. Editor at @putthison. Creator of @RLGoesHard. Words at The Washington Post, Esquire, Mr. Porter, Business of Fashion, Vulture, and The Rake.

Some personal news. Today is my last day at The New York Times. I broke in here last night and today they're kicking me out.